A picture of trans Canadians’ health and access to healthcare

a PhD Student 2017, School of Population and Public Health, Faculty of Medicine, University of British Columbia, Vancouver, BC 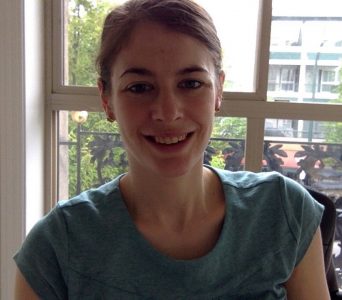 Andrea Jones is a PhD student in the School of Population and Public Health at UBC. Her thesis research examines the incidence and impact of anxiety following workplace musculoskeletal injury. Prior to this, she completed BSc and MSc degrees in Kinesiology at McMaster University in Hamilton, Ontario and worked in medical education and workplace health promotion. Her other research interests include work disability policy, the psychosocial work environment, and mental health services.

Both historically and in the present day, trans people in Canada and around the world (see Table 1 for key trans terminology) face high levels of unjustified discrimination, harassment, and health disparity. Compared to the overall population, trans people are at increased risk of infectious diseases, substance abuse, and attempted suicide, as well as other mental health problems.1-5 Globally, the odds of HIV infection in trans women are 49 times that of the overall population, and one in five trans women worldwide have HIV.4 In Canada, trans people are underrepresented in        health    research, surveillance,        and monitoring, and as such, national level statistics on the health of trans Canadians are lacking. Research on trans people in the province of Ontario documents several health disparities, especially in the domain of mental health. For example, over half of all trans women in Ontario have levels of depressive symptoms consistent with clinical depression, and 46% of trans Ontarians report having seriously considered or even attempted suicide in the last year.3,5

Trans people also face significant barriers to employment and income security, and are often targets of specifically–directed violence. Among trans Ontarians, one in five are currently unemployed or on disability: 13% have been fired for being trans and 18% believe  they were  turned down  for  a job due to their trans status.6 While some trans people in Ontario report high salaries, the median personal income is only $15,000 per year,6 which is far below the provincial median of $29,520.7 In regards to safety, 20% of trans Ontarians have been physically or sexually assaulted for being trans, and another 34% have been verbally threatened or harassed.6 While social factors such as employment, income, violence, and harassment are not direct health outcomes, they indirectly influence people’s health by affecting stress, behaviour, and material circumstances.8

Multiple institutional and social factors contribute to poor health  outcomes among  trans   people;9,10   however,  access to healthcare is of particular relevance to healthcare systems and providers. In Canada, despite universal health insurance for hospital and physician services, trans people experience a number of barriers to obtaining access to healthcare. Previous and potential future experiences of discrimination prevent trans people from obtaining healthcare when they need it. In Ontario, 21% of trans people report having avoided emergency care due to the perception that their trans status would negatively affect the encounter, and 52% of trans people presenting to the emergency department report negative experiences associated  with  their  visit.11  In  addition, over  10%  of  trans Ontarians report using hormones obtained from non– medical sources such as a friend or relative, and a small  minority  report  attempting or completing self–performed surgeries.12 This suggests that low access to transitional services may facilitate precarious healthcare practices. Lastly, further research in Ontario demonstrates that trans people lack access to proper HIV care, support, and prevention information,  as  available  HIV   services  are largely designed for and targeted at cisgendered individuals.13 These examples illustrate that there is significant room within the healthcare system to improve trans people’s access to healthcare.

In recent years, healthcare communities in Canada have become increasingly aware of previous and current discrimination and injustices in  the  healthcare  experiences  of trans Canadians, including access to healthcare. In a video outlining their vision for the future of trans healthcare in British Columbia, the Provincial Health Services Authority states that they envision a future where communities, healthcare professionals, and families can work together to create equitable healthcare; where mistakes made in the past can be recognized so that the healthcare system is able to move forward; and where the healthcare system helps trans people with their self–determined journey.14 In 2013, Vancouver Coastal Health conducted 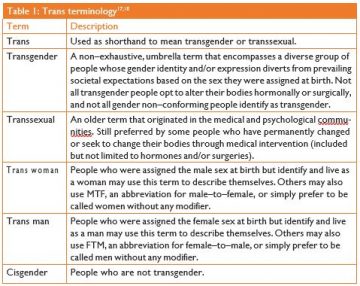 a needs assessment survey to better inform future trans healthcare delivery in British Columbia.15 Since then, a provincially– coordinated trans health services program called Trans Care BC has been implemented. Key focus areas for this provincial model include: (1) development of community and peer support services for trans people, (2) improved access to primary care providers who are experienced, culturally aware, and motivated to work with trans individuals, (3) healthcare provider education to create trans inclusive policies and practices, and to educate providers on World Professional Association for Transgender Health Standards of Care, and (4) improved access to publically–funded gender–affirming surgical options which are currently marked by long wait times and, in the province of B.C., are only performed in the city of Vancouver.14

Being trans should not be associated with poor health outcomes, such as HIV infections, clinical depression, and attempted suicide, but in Canada and other countries around the world, these associations are observed.1-5 Multiple social and system level factors contribute to the  health  disparity of trans people, and access to healthcare is among these factors.10 Media publications have described the present time as a critical tipping point for trans equality in the United States16—could a similar statement be made in Canada? In terms of access to healthcare, do initiatives such as Trans Care BC indicate that barriers to access are slowly being lifted? Only time will tell, but in order to assess the efficacy of these initiatives, trans health issues require more attention in research and population health surveillance and monitoring.Trans health disparities are unjust, and the importance of inclusive healthcare systems that are trans friendly and able to meet the unique healthcare needs of trans people must become and remain a priority.