a MD Student 2018, Faculty of Medicine, University of British Columbia, Vancouver, BC

b MD Student 2016, Faculty of Medicine, University of British Columbia, Vancouver, BC

e Department of Anesthesiology, Pharmacology and Therapeutics, Faculty of Medicine, University of British Columbia, Vancouver, BC

Point of care ultrasound  (POCUS) is a rapid, cost–effective, and accurate diagnostic tool with expanding application in a variety of medical specialties.1-3 Although not designed to replace formal sonographic investigations, POCUS provides clinicians with real– time visualization of deep pathology, and can help answer specific clinical questions at the bedside.4, 5 For example, intra– abdominal fluid can be visualized at the bedside during a trauma resuscitation, which can help  determine  the  need for immediate surgical intervention;4 pneumothorax can also be diagnosed by ultrasound with better sensitivity than standard chest radiographs.5, 6 In addition, medical procedures, such as central line placement, can be performed under ultrasound guidance, decreasing  rates of adverse events.7, 8 Ultrasound is a valuable tool with a wide range of clinical indications across specialties, making it an important skill for clinicians to develop.9

For many physicians–in–training, ultrasound education does not begin until clerkship or residency and exposure is variable, potentially leaving gaps in education and practice with POCUS.10 Recently, some medical undergraduate programs have introduced a core ultrasound curriculum into their pre– clinical years. Some schools have adopted ultrasound into pre–clinical anatomy, whereas others have integrated ultrasound into clinical skills sessions and emphasized its use as an extension of the physical exam.9, 11-15 Early exposure to the fundamentals of ultrasound could provide a theoretical and practical foundation that can be built on during later clinical years.2 As well, ultrasound can help solidify medical students’ understanding of “living anatomy” and the spatial relationships of deep anatomical structures.16, 17 Therefore, ultrasound is an important skill to integrate early into the medical undergraduate curriculum.

At the University of British Columbia (UBC), most of the medical student pre– clinical ultrasound exposure is delivered during radiology lectures, and limited opportunities exist for hands–on practice during pre–clinical years. The objective of this study was to survey and report medical student perceptions, attitudes, and comfort levels with POCUS after   a combined didactic and hands–on ultrasound symposium.

The UBC Ultrasound Club was formed in September 2014, consisting of 12 medical student executives and 2 faculty mentors: Dr. Daniel Kim (DK), and Dr. Andrew Neitzel (AN). The mission of the Ultrasound Club is to increase awareness of POCUS by providing theoretical and hands–on ultrasound education for medical undergraduate students.

The UBC Behavioral Research Ethics Board waived ethics requirements for this study under Article 2.5 of the Tri Council Policy Statement.

All UBC medical students were invited by email to express interest in attending an ultrasound symposium on January 24, 2015. Due to logistical constraints, only students from the Vancouver–Fraser Medical Program (VFMP), the largest of UBC’s four distributed sites, were eligible to attend. Among interested medical students, Microsoft Excel (Microsoft Corp., Redmond, WA) was used to randomly select 49 attendees for the ultrasound symposium. As Canadian Resident Matching Service (CaRMS) interviews took place on the day of the symposium, Year 4 medical students were unable to attend. In attendance were also 12 Ultrasound Club executives. The two co–authors (JM, RP) who attended the symposium were excluded from participating in the survey leaving 59 total survey respondents.

The ultrasound symposium took place at the Medical Student and Alumni Center (MSAC) on January 24, 2015 from 0900h to 1300h. Figure 1 outlines the schedule of the symposium. This interdisciplinary event taught students the basics of bedside ultrasound, including ultrasound physics and abdominal, cardiac, pleural, and vascular imaging. Ultrasound machines were generously donated by Sonosite (Bothell, WA), General Electric (Fairfield, CT), and the Center of Excellence for Simulation Education and Innovation (CESEI). The event was sponsored by the Medical Undergraduate Society. Didactic sessions were led by AN and DK. Students broke into small groups of 6 for the hands–on sessions, led by 4 clinicians from the Division of Critical Care, 1 from the Department of Anesthesiology, Pharmacology, and Therapeutics, 4 from the Department of Emergency Medicine, along with 2 emergency medicine residents. 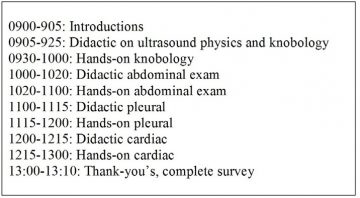 Figure 1: Schedule for the half–day ultrasound symposium hosted at the Medical Student and Alumni Centre on January 24, 2015

Students completed a survey after the symposium querying their previous ultrasound experience, comfort level before and after the symposium, beliefs on the utility of ultrasound in undergraduate medical education and in learning anatomy, and thoughts on optimal group size to learn ultrasound (see supplemental material). A Likert scale was used to grade students’ responses: strongly disagree, disagree, neither agree nor disagree, agree, and strongly agree were assigned numerical values of 1-5 respectively. Students were also encouraged to provide written feedback.

There were  13  (22%)  students  who had previous hands–on ultrasound exposure, most of which was unstructured and limited in scope. For all the ultrasound views obtained, students indicated a significant increase in their comfort level with performing the instructed scans after each module (Table 1). In addition, for all ultrasound scans, students felt their anatomical knowledge of the scanned region improved (Table 2). The general feedback from students was overwhelming support for the integration of ultrasound into all years of the medical undergraduate curriculum (Table 3). Furthermore, students indicated a strong desire to have more ultrasound education during all medical undergraduate years. The symposium increased the participants’ understanding and appreciation for  the  clinical  utility of POCUS. Collectively, the symposium appeared to be a positive experience, and students strongly felt that they would recommend a similar  experience  to their peers (Table 3). The group size also appeared to be appropriate, as 58/59 (98%) respondents indicated that a group of six was appropriate for learning ultrasound. Some general feedback provided in the comments section suggested that having anatomy models and reference materials at the bedside would have helped better correlate the ultrasound scans with underlying anatomy. In addition, several students found the cardiac module the most challenging, and suggested they would have benefited from more time with both the practical and didactic components. 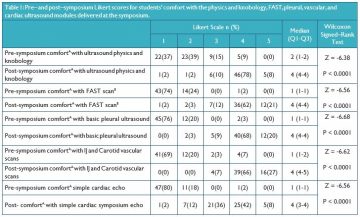 A. Comfort performing the specified scan under supervision

This study surveyed medical student attitudes towards POCUS and the integration of ultrasound into the medical undergraduate curriculum after students attended a four–hour ultrasound symposium.The symposium itself attracted significant student interest: 61 students attended out of 279 interested students among a total medical school enrollment of approximately 1150 students from Years 1 to 4. Survey results showed that the symposium significantly increased medical student comfort with the practiced scans, and helped solidify understanding of regional anatomy (Tables 1 and 2). Students also strongly supported the idea of integrating ultrasound into all years of the UBC medical undergraduate training, and wished to have more exposure to ultrasound (Table 3).

Based on the substantial interest in attending the symposium, it would appear that students are interested in learning ultrasound, particularly in Years 1 and 2. However, there was a significant difference in the numbers of students expressing interest between graduating class. Several explanations are possible. Students in Years 3 and 4 have significant time constraints due to clinical duties. Also, students in Years 3 and 4 do not know their schedule several months in advance and are potentially less likely to   commit

to an extra–curricular event. It is also possible that Year 3 and 4 students felt that learning ultrasound at their stage of education was less valuable. As our survey did not assess reasons for disinterest in ultrasound, it is not possible to determine the cause of the discrepancy in interest between graduating classes.

Many options exist for integrating ultrasound into a medical undergraduate curriculum. Ultrasound could be integrated into the current radiology or anatomy curricula at UBC. This would help students visualize “live anatomy” and explore some of the dynamic processes that occur within the body. Alternatively, ultrasound could be integrated into a clinical skills course as an adjunct to the physical exam.13, 14  This approach could emphasize clinical applications of ultrasound and help students correlate physical exam findings to underlying anatomy.16, 18 In addition, ultrasound could become a core component of a core clerkship rotations such as anesthesia, emergency medicine,  obstetrics,  and/  or internal medicine.11 A combination of these approaches could also be adopted. Several students provided written feedback that cardiac imaging should be delayed until Years 3 or 4 because of the difficulty of obtaining echocardiographic images; however, students still indicated that performing cardiac scans improved their understanding of regional anatomy and physiology (Table 2).

Implementing a standardized ultrasound curriculum could benefit medical students in several ways. Despite the short exposure to ultrasound at the symposium, students felt that their understanding of regional anatomy improved (Table 2). This aligns with previous studies showing that ultrasound is a valuable anatomy teaching tool.16, 18

An ultrasound curriculum could also help students appreciate broader applications for POCUS in their future practice, serving students well across a range of future medical disciplines.1-3 Having an ultrasound curriculum integrated into medical undergraduate education could help ensure all students have a basic,  evidence–based skill set in bedside sonography that can be built upon in later clinical years.10, 19, 20

Although an integrated ultrasound curriculum would be very beneficial for students, integrating ultrasound into the medical undergraduate curriculum has its challenges.The cost of ultrasound machines is not insignificant.9 In addition, recruiting instructors with ultrasound experience to supervise might be associated with additional costs.14 It is therefore critical to involve POCUS–practicing physicians from a wide range of medical  specialties, 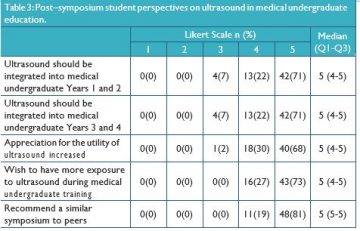 “Ultrasound could be integrated into the current radiology or anatomy curricula at UBC.This would help students visualize “live anatomy” and explore some of the dynamic processes that occur within the body.”

including emergency medicine, critical care, anesthesia, cardiology, obstetrics, internal medicine, and trauma. Another possible solution is to use non–physician healthcare professionals, such as sonography technicians.10 A balance between having small groups with enough machines, and the cost associated with such an endeavor might be difficult to achieve. Our results suggest a group size of six was effective for teaching and learning ultrasound.

There are several limitations to our survey data.There were no Year 4 students in attendance due to CaRMS interviews, so their opinions were not represented. In addition, only data from VFMP students were included in this study. Selection bias is another limitation as students who attended the symposium might hold more favorable views of ultrasound than those that did not attend, making the results less generalizable. Finally, student comfort with the scans and anatomy was self–reported, and there was no objective criteria or testing to assess improvement.

Despite the limitations of our survey, ultrasound has been shown to be a powerful educational tool, particularly to enhance understanding of regional anatomy and as an extension of the physical exam. The extensive interest demonstrated by UBC medical students and their expressed desire to have more ultrasound exposure during their training suggests that integration of ultrasound into the UBC medical undergraduate curriculum should be considered.

The authors do not have any conflicts of interest to disclose.