A clinical review of the diagnosis, treatment and prevention of opioid-related harms

a MD Student 2016, Faculty of Medicine, University of British Columbia, Vancouver, BC

In North America, the harms associated with the increased use of prescription and illicit opioids constitute a serious public health concern.1,2 In 2006, more than 256 million opioid prescriptions were dispensed from pharmacies in the United States (U.S.), a quantity almost twice that of a decade prior.1 Similarly, Canada has  seen  a  two-fold  increase  in prescription opioid  use  between 2000 and 2010,1 making it the world’s second-largest consumer per capita of prescription opioids.3 A Canadian survey in 2013 found that 14.9% of individuals between the ages of 15 and 64 years were prescription opioid users.4 It is estimated that 2.3% of Canadian adults partake in prescription opioid abuse. Among youth between the ages of 15 and 18 years, rates are even higher, at 5.8%4 Though Canadian estimates are lacking, data from the U.S. National Survey on Drug Use and Health in 2013 have also revealed that approximately 681,000 individuals over the age of 12 years disclosed heroin use in the past year alone, a number that has been steadily increasing since 2007.5 Furthermore, almost twice as many respondents  in  2013  reported  having tried heroin for the first time compared with findings from 2006 (169,000 versus 90,000, respectively).5

As a result of these growing trends, opioid use disorder has become a serious public health concern.1,2 A Toronto-based study of patients admitted for opioid detoxification found that 37% received their opioids from physician prescription only, while 26% were from a combination 14.9% of individuals between the ages of 15 and 64 years were prescription opioid users.4 It is estimated that 2.3% of Canadian adults partake in prescription opioid abuse.Among youth between the ages of 15 and 18 years, rates are even higher, at 5.8% of prescription and “street” sources, and only 21% sourced their opioids purely from the “street”.6 Without treatment, the risk of premature death amongst illicit opioid users is significant, with estimates ranging from 13 to 63 times higher than that of  the  general population.7-9 From  a Canadian healthcare perspective, coroner’s reports in Ontario show a 242% increase in overall opioid-related deaths between 1991 and 2010.4

In recent years, fentanyl, a short- acting synthetic opioid analgesic, has increasingly contributed to premature mortality trends in Canada. Fentanyl, which is 50 to 100 times more potent than morphine, has traditionally been used for procedural sedation in the inpatient setting; it is also employed in the management of acute and chronic pain, for which  its  infrequent  dosing and transdermal formulation carries appeal.10,11 However, its increased emergence and availability in the illicit drug market through diversion, local production, or illegal importation has resulted in a serious public health and safety concern.11-13 In British Columbia (B.C.), there has been a 7-fold increase in fentanyl-related deaths over the past four  years,  accounting  for  25%  of the province’s overall drug-related deaths.12 Given the increasing opioid epidemic, both locally and nationally, and its potentially devastating harms including overdose and mortality, we briefly review the diagnosis and treatment of  an individual presenting with an opioid overdose and provide an overview of some strategies to prevent future opioid- related harms.

Opiates, which are naturally occurring and extracted from the poppy plant Papaver somniferum (e.g., morphine, codeine, thebaine), belong to a larger class of compounds called opioids. Opioids can be naturally occurring, semi-synthetic, or synthetic, and they act at the bodies of opioid receptors. Mu, kappa, and delta— the major opioid receptor subtypes— are found throughout both the central and peripheral nervous systems. When activated,  these  receptors  contribute to a range of physiologic responses. The clinical manifestations of opioid use vary based on the dose, receptor targeted, and neurotransmitter(s) involved, but typically include analgesia, euphoria, and/ or respiratory depression.

In any suspected opioid overdose, the physical examination is used not only in helping to confirm the diagnosis, but also 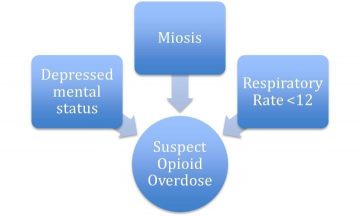 in identifying other conditions requiring treatment. A decreased respiratory rate (RR) (<12 breaths per  minute  [bpm]), or apnea, a depressed mental  status,  and constricted pupils—miosis—are the classic signs of opioid toxicity,  though the absence of any of these  does  not rule out the diagnosis (see Figure 1).14 Furthermore, it is important to exclude other potentially reversible  causes  for  an individual’s clinical presentation (i.e., stroke, sepsis, metabolic disturbance) and consider the possibility of co-ingestions. Though not always possible, identifying the specific opioid used (i.e., a short-acting versus long-acting opioid), its formulation, and the dose taken, as well as obtaining information on the patient’s previous substance use history and intention for self-harm, can all prove useful in helping to anticipate the expected course of treatment and the need for a psychiatric evaluation.

Beyond a basic hematologic and electrolyte profile to assess for an anion gap, initial investigations should also include a serum glucose and creatinine kinase to exclude hypoglycemia and rhabdomyolysis, respectively.15,16 To investigate for co- ingestions, an acetaminophen, salicylate and alcohol level can be requested in addition  to  an   electrocardiogram.15,16   A chest x-ray can be done to look for concurrent lung pathology and, specifically, pulmonary edema.15-17 Though a urine drug screen (UDS) can be helpful, opioid toxicity is a clinical diagnosis, and acute management should not be  delayed while awaiting or interpreting the results of a UDS.18 Since  both  false  positive  and false negative results can occur, the overall clinical picture must be taken into consideration to obtain a diagnosis.

Medical stabilization is always the priority for the management of  any opioid overdose, and respiratory support, including mechanical ventilation, may be required temporarily. Routine monitoring of vitals is essential. In the event of respiratory compromise, naloxone (Narcan™), a short-acting opioid receptor antagonist, is a useful antidote and can be administered parenterally at an initial dose of 0.04 mg, and repeated  at escalating doses every few minutes to a maximum dose of 15 mg, until adequate ventilation is achieved (i.e., RR>12 bpm).14 It is important to remember that the duration  of  action  of  naloxone  is only

30 to 120 minutes. Therefore, repeated administrations or the initiation of a naloxone infusion may be required to overcome the toxicity associated with ingestion of a long-acting opioid or to combat the prolonged intoxication that can occur in overdose with short acting opioids due to alterations in normal pharmacokinetic properties.14,19 The variable and possibly transient   response to naloxone makes close monitoring of vital signs and level of consciousness of utmost importance in the management of a suspected opioid overdose.

Naloxone administration can result in precipitated withdrawal. This manifests as diaphoresis, piloerection, GI upset, tachycardia, restlessness, irritability, anxiety, yawning, tremor, lacrimation, rhinorrhea, and/or body aches.14 Precipitated withdrawal is unpleasant and should be avoided if possible; however, these effects are usually short-lived and should be treated conservatively until immediate risks of overdose are addressed.14

Patient education about ways to  use opioids safely is crucial and includes advising individuals not to use opioids alone, encouraging individuals to initially test a small sample of one’s  opioid supply to help determine its potency, and promoting the use of supervised injection facilities such as Insite, a supervised injection facility located in Vancouver’s downtown  eastside   neighbourhood. At Insite, individuals can access sterile equipment and inject pre-obtained illicit drugs.20 This program, which is operated by its local health authority, Vancouver Coastal Health,  has  been  shown  to be cost-effective, and its opening was associated with a 35% reduction in overdose deaths.19,20 Challenged by many governments and regulatory bodies, safe injection facilities like Insite have been a focus of controversy.21 However, overwhelming positive scientific evidence for the benefits of safe injection facilities has continued to win-out against ideological arguments opposing the use of supervised injection sites.22

a life-saving, harm-reducing public health service.23 Beyond the provision of sterile needles to individuals who inject drugs, many of these programs offer additional services including counselling and testing for HIV and other infectious diseases, referral and entry to addiction treatment programs, and the opportunity for overdose education and prevention.23 Through these activities, needle exchange programs have been shown to decrease the transmission of HIV and hepatitis C virus while also being cost effective.24-26

Health care providers should inform patients about B.C.’sTake Home Naloxone program, which provides naloxone rescue kits and drug administration training to opioid–dependent individuals or their loved ones. The aim of this program is to reduce the risk for unintentional deaths from opioid overdose.27 Lastly, although evidence for their efficacy is limited,28 educational campaigns for disseminating information regarding local trends in drug-related harms to the general public have been utilized. Recently, for example, the “Know your source?” campaign was a joint collaboration between health care providers and law enforcement that focused on the increasing prevalence of fentanyl being sold in illicit drug markets, and the risks associated with this.29

Individuals with an opioid use disorder should routinely be offered opioid replacement therapy.  Options for this in Canada currently include opioid agonist therapy with either methadone (a full opioid agonist) or buprenorphine (a partial opioid agonist). In Canada, buprenorphine is prescribed in combination with naloxone under the trade name Suboxone. Methadone is significantly more effective at treatment retention and suppression of heroin use than non-pharmacologic approaches.30 Buprenorphine/naloxone and methadone are equally effective at  decreasing opioid use when equivalent doses are compared.31 Furthermore, as a result of its favourable safety profile, Vancouver Coastal Health’s recently updated opioid    guidelines    now   recommend buprenorphine/naloxone as the first-line agent for opioid replacement therapy.32,33 Withdrawal management alone (i.e., detox without transition to longer-term treatment) is not recommended, since this approach has been associated with elevated rates of HIV infection and death.34,35

In instances where an individual does not want to engage in treatment with pharmacotherapy, medical detoxification with subsequent referral to a community or residential treatment facility, self-help groups, a drug and alcohol counsellor, or other psychosocial interventions are potential treatment options. Unfortunately, at this time non-pharmacologic approaches are understudied and lack robust data from systematic reviews and meta-analyses. For those patients not committed to completely abstaining from opioids, continued motivational interviewing and harm reduction strategies can be maintained in the interim to improve safety and minimize risks associated with ongoing use.

Physician education on appropriate opioid prescribing practices is of grave importance. This topic does not receive adequatetimeandresources in our current medical curricula in British Columbia. A recent publication of recommendations from the British Columbia Node  of  the Canadian Research Initiative on Substance Misuse highlights the urgency with which policy makers, regulatory bodies, and clinicians need to act together to reduce fatal opioid overdose.36 One  of their specific recommendations pertains to the importance of regular Pharmanet surveillance to prevent overlapping opioid prescriptions and to monitor for multiple prescribers. Other harm reduction approaches include the utilization of opioid use agreements/ contracts, utilizing the option for daily witnessed ingestion and/or  dispensing of opioids, not co-prescribing opioids and sedatives, and regularly re-evaluating the indication for any opioid prescription while also considering if a suitable  non-opioid  alternative  exists.  The Michael DeGroote National Pain Centre at McMaster University provides excellent resources for tools such as opioid use agreements/contracts and other point of care tools that can be incorporated into electronic medical records (EMR) platforms for increased safety in opioid prescribing.37

In conclusion, Canada’s increasing prevalence of opioid use and disorder combined  with  the   rapid  emergence of fentanyl in the illicit drug market has resulted in a national opioid overdose crisis. Knowing the clinical findings and acute management of opioid overdose is necessary for all physicians, irrespective of one’s scope of practice. Although lives can be saved by applying the basic diagnostic and management skills reviewed in this article, the future of opioid overdose prevention lies in safe opioid prescribing, compassionate and evidence-based treatment of opioid use disorder,  and the continued expansion and improved accessibility of harm reduction services.

The authors do not have any conflicts of interest to disclose.