Garlic-induced Esophagitis and Gastroenteritis: A Review of Four Cases

Garlic, or Allium sativum, is a common culinary ingredient used as a natural medicine for hypertension, hyperlipidemia, cancer prevention, treatment of fungal infection, and atherosclerosis prevention. We reviewed all cases of garlic–induced esophagitis and gastroenteritis available in academic literature. A literature search using combinations of the MeSH headings “garlic”, “Allium sativum”, “esophagitis”, and “deglutition disorders” was conducted in the Embase and PubMed computer databases. References involving reports of esophagitis and gastroenteritis were retrieved. Additional relevant articles were found by analyzing the references provided within the retrieved articles. Our review uncovered four published case reports of garlic–induced esophagitis, and one possible garlic–induced gastroenteritis. In three cases, the inflammation was caused by direct injury, both by mechanical and possibly caustic effects. Garlic was thought to have caused eosinophilic inflammation in the remaining two cases, both of which involved a significant atopic medical history. Given the prevalence of garlic in both culinary and therapeutic settings, we believe clinicians should be aware of its potential for gastrointestinal symptoms. Esophagitis and gastroenteritis should be on the differential as a cause of upper gastrointestinal symptoms in garlic users, especially in atopic patients. In suspect patients, thorough medical histories, endoscopy, biopsies, and cutaneous testing may all be useful and should be utilized when appropriate. Management should include avoidance of the offending agent, and supportive care. Oral corticosteroids may be useful in certain patients. Follow–up endoscopy can be considered, especially in patients who have experienced direct injury.

Eosinophilic esophagitis is an atopic, IgE–mediated condition, usually occurring in response to food allergens. It is an important consideration for patients presenting with complaints of retrosternal discomfort and dysphagia, especially when unresponsive to treatments for gastroesophageal reflux disease. The most common food culprits in adults include legumes, nuts, fruits, wheat, milk, eggs, and soy.[5‑7] In children, the common triggers include milk, eggs, wheat, beef, soy, and chicken.[8] Diagnosis typically requires eosinophilia of the esophageal epithelium on biopsy.[9] Management usually involves treatment with oral corticosteroids and initiation of an elimination diet avoiding the six common allergic food triggers.[6,9,10] Gradual stepwise reintroduction is used to identify the offending foods.[6,9,10]

Garlic (Allium sativum) is a common culinary ingredient often used therapeutically as a natural medicine for hypertension, hyperlipidemia, cancer prevention, treatment of fungal infection, and atherosclerosis prevention.[11] Aside from causing a mild blood pressure decrease in hypertensive patients, quality evidence for the remainder of the indications is currently insufficient and limited.[11] Side effects of garlic use are usually mild and include malodorous breath and dyspepsia.[11] Rarely, garlic can cause significant gastrointestinal problems, including gastroenteritis and esophagitis.[12‑16]

Herein, we review all cases of garlic–related esophagitis and gastroenteritis available in the academic literature, including both direct and allergic causes.

A literature search using combinations of the MeSH headings “garlic”, “allium sativum”, “esophagitis”, and “deglutition disorders” was conducted in the Embase and PubMed computer databases. References involving reports of esophagitis and gastroenteritis were retrieved. Additional relevant articles were found by analyzing the references provided within the retrieved articles. Articles were then reviewed by two independent evaluators to compare and contrast each of the cases with respect to the characteristics of the patients, the identification and management strategies employed, and the eventual outcome of the case. The findings are summarized in the Results section.

Our literature search revealed a total of four published case reports of garlic–induced esophagitis, and one possible garlic–induced gastroenteritis. Results are summarized in Table 1. 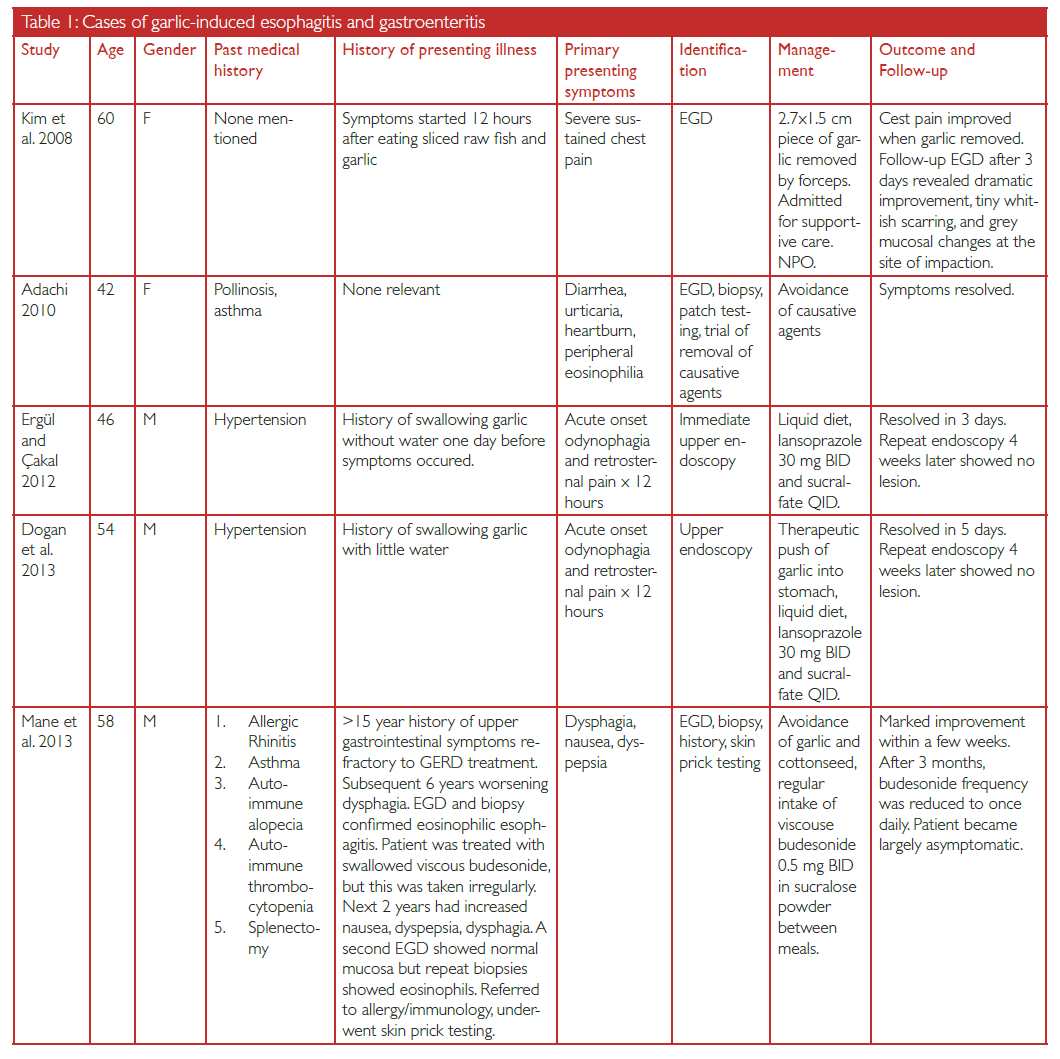 Kim et al. (2008) reported a case of a 60–year–old female presenting with severe and sustained chest pain 12 hours after consuming sliced raw fish and garlic.[14] Esophagogastroduodenoscopy (EGD) was performed and a 2.7 x 1.5 cm piece of garlic was retrieved via forceps. Bullous necrotic changes were seen at the site of impaction. The patient was admitted for supportive care and was put on NPO (nothing by mouth) protocol. Her symptoms resolved shortly afterwards. A follow–up EGD three days after admission showed dramatic improvement, and the patient was discharged with no further complications.

Adachi (2010) shared a case of a 42–year–old woman with a history of pollinosis and asthma presenting with urticaria, heartburn, diarrhea, and peripheral eosinophilia.[16] She was found to have marked eosinophils in the mucosa of her alimentary tract and was therefore diagnosed with eosinophilic gastroenteritis, and subsequently underwent cutaneous patch testing. Patch testing was positive for garlic and sesame, and given that improvement was seen with removal of these two allergens, it was thought that one or both of garlic and sesame were the causative agents.

Ergül and Çakal (2012) detailed a case of a 46–year–old male with a history of hypertension presenting with 12 hours of odynophagia and retrosternal pain.[12] History revealed that the patient had swallowed garlic as treatment for hypertensive attack on the previous day without water. Immediate upper endoscopy was performed and revealed an edematous, fragile mucosal area with superficial ulcers in the upper esophagus. The patient was managed with a liquid diet, lansoprazole, and sucralfate. Esophageal symptoms resolved in three days, and repeat endoscopy four weeks post–discharge showed no persisting lesion.

Doğan et al. (2013) reported a strikingly similar case of a 54–year–old man with hypertension, also presenting with 12 hours of odynophagia and retrosternal pain and a history of swallowing garlic with little water for hypertensive attack.[13] Endoscopy showed garlic in the upper part of the esophagus which was therapeutically pushed into the stomach. A 2.5 cm long lesion was seen in addition to edematous, fragile mucosa. Management, as in the case reported by Ergül and Çakal (2012), consisted of a liquid diet, lansoprazole, and sucralfate. Symptoms resolved in five days, and follow–up endoscopy in four weeks showed no lesion.

Mane (2013) published a case of a 50–year–old male with a history of allergic rhinitis, asthma, and autoimmune disease who had been treated for gastroesophageal reflux disease for over 15 years for upper gastrointestinal symptoms, but only experienced partial improvement.[15] In the subsequent six years, symptoms worsened and he began to experience significant dysphagia. EGD and biopsies confirmed eosinophilic esophagitis, and the patient was given swallowed viscous budesonide as treatment, which was taken irregularly. The patient experienced two more years of worsening nausea, dysphagia, and dyspepsia. A second EGD showed normal appearing mucosa, although biopsies showed the presence of eosinophils. The patient was seen in an allergy and immunology clinic for food hypersensitivity testing. Skin prick testing with 44 food extracts was positive only to garlic and cottonseed. Medical history did not reveal consumption of cottonseed or any of the typical suspect foods, but was positive for frequent consumption of garlic. Thus, the diagnosis of garlic–induced eosinophilic esophagitis was made. The patient was recommended garlic and cottonseed avoidance and treated with regular budesonide. Marked improvement was seen within a few weeks, and the frequency of his budesonide was decreased after three months. The patient became largely asymptomatic with the exception of occasional symptoms following consumption of garlic–containing foods.

In comparing the three cases of direct injury caused by garlic, similarities can be seen.[12‑14] In all three cases, symptoms started within 24 hours of garlic ingestion, and presenting symptoms included retrosternal chest pain consistent with an esophageal source. Endoscopy was a key diagnostic tool in all three cases. Symptom improvement was seen within three days and follow–up visualization via endoscopy showed significant improvement in all three cases. However, there were differences in management strategies and follow-up timelines. One case was managed with supportive care and NPO protocol, whereas the others were managed with the combination of a liquid diet, proton–pump inhibitor, and sucralfate. Follow–up EGD in the case reported by Kim et al. (2008) was performed three days after discharge, whereas follow–up endoscopies in the cases reported by Ergül and Çakal (2012) and Doğan et al. (2013) were performed four weeks following discharge.

As suggested by Ergül and Çakal (2012), garlic may have had a caustic effect in the cases due to its acidic pH. Direct esophageal injury from mechanical trauma is another possible mechanism. Lifestyle measures, including adequate water intake and avoidance of lying supine after meals, are likely to reduce the incidence of all types of “pill–induced esophagitis”, including those caused by foods such as garlic.

When comparing the two cases of eosinophilic inflammation, both patients had a positive atopic history.[15,16] EGD, biopsy, and cutaneous testing were diagnostically instrumental in both cases, and avoidance of garlic was a common strategy in management. Symptoms were different due to the different sites of inflammation. Elimination of typical agents via a thorough medical history seemed to play a larger role in the case reported by Mane et al. (2013), and unlike the patient reported by Adachi (2010), management included viscous budesonide and sucralfate. There was no mention of follow–up endoscopies in either case.

Although standard elimination diets, stepwise reintroduction of suspect foods, and oral corticosteroids are the typical management strategies of eosinophilic esophagitis, sole use of these strategies would not have detected the true cause of the inflammation in the eosinophilic cases presented above. The six–food elimination diet, by design, is only diagnostically effective with respect to the six foods in the diet. It can also be a challenging treatment strategy for patients to follow. Clinicians should consider cutaneous testing in suspected cases of eosinophilic esophagitis and gastroenteritis to rule out atypical foods, such as garlic, as causes of inflammation. Cutaneous tests were paramount in diagnosing the cases presented by Adachi (2010) and Mane et al. (2013).

Endoscopic investigation was crucial in the diagnostic evaluation of all cases. In addition to allowing visualization and an opportunity to obtain biopsies, endoscopy can play a key role in treatment, as demonstrated in the case presented by Doğan et al. (2013). Furthermore, endoscopy is important in follow–up, particularly in cases involving direct injury, as it allows for evaluation of healing and treatment efficacy. We agree with the suggestion made by Mane et al. (2013) regarding a low threshold for biopsy in symptomatic patients with normal appearing mucosa, due to the possibility of an underlying eosinophilic process. This, however, should only be considered if an eosinophilic cause makes sense within the clinical context of the patient.

Garlic is a common food ingredient frequently used by individuals for therapeutic effects. It is important to be aware of its rare potential for harm. Thorough dietary and medication histories are important for identification of adverse effects such as esophagitis or gastroenteritis. Garlic–induced esophagitis and gastroenteritis have a small reported incidence in the academic literature. However, more than 70% of Canadians use complementary and alternative health care therapies regularly, and clinicians would benefit from broadening their differential diagnoses to include complications of these therapies.[17]

Clinicians should be aware of both direct and allergic causes of inflammation in the gastrointestinal tract. Esophagitis and gastroenteritis should be on the differential diagnosis for gastrointestinal symptoms, especially in the setting of an atopic patient. Thorough medical histories, endoscopy, biopsies, and cutaneous testing may all be useful in the evaluation of these patients, and should be utilized when appropriate. Management can include avoidance of the offending agent, supportive care, and possibly oral corticosteroids. Follow–up endoscopy can be considered, especially in patients who have experienced direct injury.