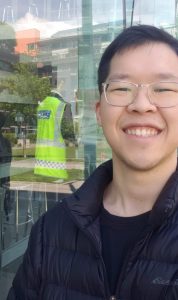 Up next in our “From the Flex Files” series, we chat with Ryan Yan from the VFMP program (Class of 2021). As a member of UBC SOS eVent, Ryan shares his experience developing devices for patients and providers during COVID-19.

Tell us a little bit about your research project.

Back in mid-March, when our clinical rotations were suspended because of COVID-19, I think most medical students felt a void in their lives and sought ways to help. That’s when Philip Edgcumbe posted an open invitation to be a part of UBC SOS eVent, an open-source initiative he co-founded with Dr Chris Nguan and Alex Waslen to rapidly develop a ventilator to combat a potential shortage, as seen in other parts of the world. The group has now evolved greatly, with over 100 volunteers with a diverse skillset and experiences, expanding our scope to simultaneously developing seven devices and platforms, and undergoing a name change to COSMIC Medical. We’ve been featured in several media stories, most recently in the Vancouver Sun, and one of our devices won a large grant! I’m personally a member of the snorkel mask, bag-valve mask ventilator, dental adaptation, and finance teams, as well as a co-lead for the clinical respiratory support project.

What do you find interesting in this field of research? How did you initially get involved?

I was initially drawn to this project because I’ve always liked to build things and work with my hands. I’ve tinkered with electronics, jumped into smart home and Internet of Things devices, and have always attempted to fix my car and bike before sending them into the shop. This opportunity seemed to be a logical mix between medicine and this desire to build something from scratch, troubleshoot problems, and hopefully come up with something that could be used to save lives.

What does a typical day look like while working on your project?

Before I explain what a typical day looks like, I want to preface this by saying that since this is a volunteer-run group, everyone involved can contribute as much or as little as they’d like in order to suit their own lives. Personally, this has become a major part of my life. The day usually starts off with sending some emails before the first Zoom meeting. After the meetings are done, I’d usually be doing some product testing, heading somewhere for a curbside pickup for some parts, heading to a workshop to build something, or staying at home sending some more emails. Later on in the afternoon, there may be another meeting. On Thursdays, however, there are design review meetings where project leaders present their project to experts and discuss any progress made over the week. We’ve just started live-streaming these meetings to Facebook. From there, things usually wind down and it’s a matter of tying up loose ends after the day and preparing for the next.

What is one of your favourite project-related memories? What experience provided the greatest learning opportunity?

We’ve recently partnered with the Arts Club Theatre Company, who have allowed us to use one of their rehearsal spaces to create a mock ward for COVID-19 patients, which will allow us to see our entire COSMIC line of devices working together in a single setting. This was originally an idea from my co-lead on the clinical respiratory support project, Dr Bruce Woodburn. While we are still developing this idea, it’s been something that I’ve been really excited about and we hope to have it ready by mid-May. This entire project has been an incredible learning opportunity, basically taking part in a company being built from scratch and jumping into roles that I’ve had little to no formal training in. One such example was having an idea for a device late at night, taking the next 3 hours to learn the basics of computer-assisted design, and creating a 3D model before going to bed…at 7am. Needless to say, I slept in that morning.

What advice would you give another student interested in this area of research?

The beauty of medical training, at least in Canada, is that it brings together a group of very talented individuals with many interests outside of their unifying desire to become physicians. However, it’s also incredibly easy to get sucked into living, breathing, and dreaming about medicine, causing some of those other interests to take a back seat. My advice is not just “don’t let that happen”, but rather to make room to bring that part of your life together with medicine. Try to find a way to merge the two. Since this is the FLEX Files, it’s notable to mention that given the right circumstances, FLEX can be a great opportunity to do this. Supportive supervisors are everywhere, see if you can find one who shares your interests!